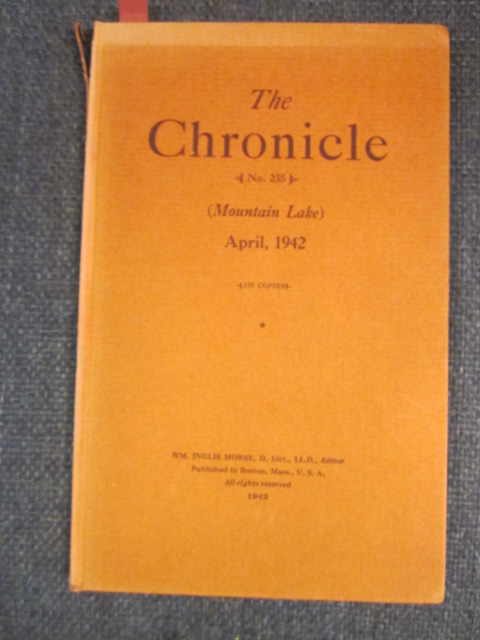 38pp. plus further six pp. photos and diagrams. Short essays and anecdotes; this number particularly focused on the Mountain Lake community of Florida and Bliss Carman. Illustrated with 14 photos 1.8" square of Mountain Lake personalities, as well as the Mountain Lake Ex Libris bookplate, the Early Building of the Mt. Lake Club House. Sketches by WIM throughout; portraits of Carlyle by W. Greaves and of Carman in the WIM collection. 22 letters of Bliss Carman to Herbert Small (of 50 purchased by WIM late 1941) transcribed.. List of recipients of The Chronicle "as per acknowledgements in November 1941" and excerpts from recipients. List of guests at the Mountain Lake Club for the 1942 Spring Season; and a list of widows there: 1941-42. Former owner's neat signature dated 1980 to front endpapers. Spine and half-inch strip along top of front sunned. Backstrip of spine separated for two inches along rear gutter and 1 inch along front gutter.